Affinity Photo Macros: Use Them to Speed Up Your Workflow

True or false? We should always be looking for ways to speed up workflow.

For me, that answer is always true.

Macros are an easy way to speed up workflow. When you're working on an image and you think you have an idea for an interesting style or effect, one that you might use again later, you can turn it into a macro. A macro is a file that includes a series of edits. Affinity Photo makes the process simple.

Let's say you have three images open in Affinity Photo and you want to apply a similar effect to each of them. You can use a macro to record the edits you make on the first image and apply those edits to the other two images automatically.

After hitting the record button in the Macro window, Affinity Photo will keep track of any steps you take while editing an image. 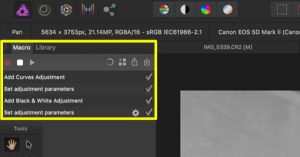 Once I'm done creating my black and white look, I can export the macro as a file, saving as a .afmacro file anywhere on my computer. This also gives me the ability to email it to someone so they can use it. 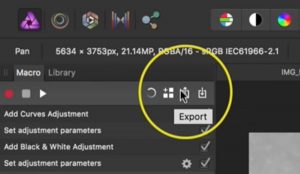 On a separate photo, I can simply import the macro file and hit the play button. The macro instantly applies all the included steps to the photo.

If you want to adjust a macro before applying it to a photo, you can change the edits inside the Macro window. Optionally, you can uncheck steps which will leave them out of the macro when it's applied. This is a useful feature because sometimes the edits won't work exactly the same for each image. 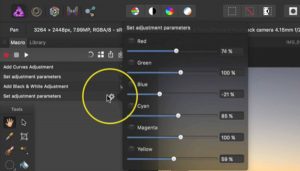 Macros are just one way that Affinity Photo speeds up workflow. You can save a lot of time by storing a series of edits in a macro file. I consider my time valuable, so I dig tools like macros.