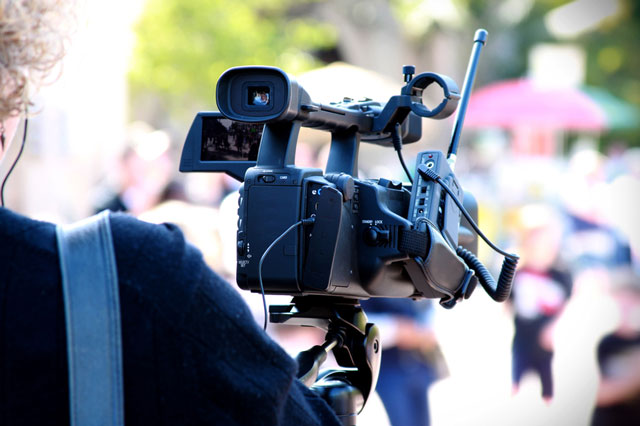 The principles are still the same (video is video after all), but the tools and techniques you use can be different.

I'm going to share some random tips for shooting video outdoors here. This list isn't in any particular order; it's just a bunch of ideas that you might want to keep in mind.

1. Look at the shadows to assess the light

When you head outside to shoot video, one of the first questions you need to ask yourself is:

What kind of light will you be working with outdoors?

Here is an easy way to quickly assess the light:

Find a shadow on the ground. This could be the shadow from a tree trunk, a street sign, or anything solid.

Look at the edge of the shadow. Is the shadow's edge crisp and well-defined? If so, then you know you'll be working with hard light.

Is the shadow's edge soft and gradual? If so, then you know you're working with soft light.

Is there no obvious shadow at all? Then you know the light is extremely soft.

Does the available light quality match up with what you want for your video shoot? If it doesn't, then you might need to use some additional tools and techniques to change the light.

One of those tools is likely a reflector.

There are tools which are super-useful in still photography, that aren't very useful in videography.

A collapsible reflector disc is one of those tools. Indoors, you can still use them, but outdoors -- it's not a great reflector for video.

The problem is that the slightest wind can move the reflector around. Not only is it difficult to work with, but it creates moving light on your subject's face -- this is especially true if it's a shiny metallic reflector (such as silver or gold).

The moving light on your subject's face makes them look like they have water reflecting onto them, as if they are standing over a swimming pool or pond.

It's possible that you intentionally want this look, but most likely you don't. So it's best to avoid using collapsible reflectors outdoors. They're too flimsy.

Instead, using something rigid like a thick piece of white foamcore board. This is ideal for a reflector.

I sometimes use Westcott Scrim Jims which have a rigid frame and a fabric reflector. They're a happy medium.

They're easily portable because they collapse and fit into a bag, but they're far more rigid than a collapsible disc reflector.

That said, they're not perfectly rigid. If you're using the shiny silver side of a fabric on a Scrim Jim, you can still get the rippling water effect if there's a breeze, so a white foamcore board is better (though certainly less portable).

Another option is a shiny board which is rigid and extremely reflective. If you need A LOT of reflected light, this is a great option.

As a side note, I want to mention something important: You can hurt someone's eyes by using the silver or gold side of a reflector to reflect light into their face. That's something to avoid.

Instead, use the metallic side of a reflector to light inanimate objects such as trees behind your main subject, or to side-light or rim-light your subject.

But never shine the metallic side into their face. It can cause them pain and possibly damage their eyes.

3. Use C-Stands to give yourself a hand

If you're a "one man band" as many video shooters are these days, then a C-stand can be your loyal, helpful friend.

A C-stand is a heavy stand that can be used to hold things in place. For example, if you need a reflector to be held at a certain position without moving, you can use a C-stand with a grip head to do that.

Even though a C-stand is a little on the heavy side, you still need a sandbag anytime you use a C-stand.

Think of them as one unit (C-stand and sandbag). They belong together and never should be separated.

A C-stand that falls over in the wind can injure someone.

4. An ND Filter is almost a requirement outdoors

Chances are that you don't want your outdoor video to look like a battle scene from Saving Private Ryan.

But you might have a dilemma: You can't adjust the shutter speed because you want normal motion blur, but you also want a shallow depth of field, so you don't want too high of an F-Stop.

What do you do?

Well, you can have your cake and eat it too! Just put an ND filter in front of your lens (or switch it on, if you have it built into your camera).

An ND filter is a Neutral Density filter. It reduces the amount of light entering your camera's sensor, without changing the quality or color of the light.

Without the ND filter, when you open the aperture of your camera all the way (the same thing as the lowest F-stop number), you would overexpose your image.

The ND filter can prevent this. It allows you to have BOTH a shallow depth of field AND normal motion blur.

Important: More people should be using ND filters when they shoot video outdoors.

By the way, the built-in ND filter is a luxury that many prosumer cameras have, whereas DSLR cameras require you to purchase ND filters as separate accessories.

You generally don't want people to be squinting their eyes when they're on video.

Want to know how to get them to stop?

Put the sun behind them. Then use a gentle (white) reflector to bounce some light into their face (which is in shadow because the sun is behind them).

This gives them a nice rim light from the sun, and you can use a reflector for fill, or use two reflectors for both key and fill sources.

This makes it harder for them to see bright objects without squinting.

I could probably write a list of another fifty tips for shooting video outdoors, but that's too much for one article. I'll share more in the future.

These are the ones that are on my mind right now, and I think they can be immediately helpful to you.

Will they help you? What has been your experience with these items? What are your thoughts? Let me know in the comments...