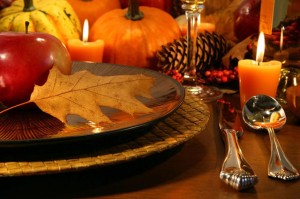 Next week is Thanksgiving here in the US, and you might want to capture some video of your family and friends during the occasion.

I'm a huge fan of using video as a memory-keeping tool.

With that in mind, I want to share several tips for capturing video at this type of event.

I'm going to make some assumptions here. First, I'm assuming that you're planning not just to shoot video, but you're also planning to edit it later.

The second assumption is that you're not going to bring a lot of video equipment. For example, you won't bring a Steadicam to Thanksgiving (although frankly I doubt anybody in my family would be surprised if I showed up at Thanksgiving dinner wearing a Steadicam -- just another one of the many ways that I'm still a child).

1. Answer This Question: Who Will Be Your Audience?

When you're making a video, you always need to ask yourself this question: Who will be your audience?

The answer can dramatically change your video: what you're shooting, and how you edit it together.

For example, if you're making it for your spouse and children, you might try to get shots of each of them.

If you're making it for your aging grandmother, then you might shoot video of family members talking about her impact on their lives.

It's important to decide who the audience is first.

It's definitely possible you could "wing it" when you arrive, but you'll likely find you get better clips when you plan a shot list in advance.

I usually treat it like a brainstorming session. I start writing things down as I think of them, and then I organize them.

You could go on and on with these...

And for each of these items I could capture close-ups, medium shots, and wide shots.

If you don't feel like you have a lot of great ideas, then it can help to watch other people's videos for inspiration.

Of course, YouTube is a great resource for this. Type "Thanksgiving Dinner with family" in the YouTube search bar and start watching videos to see if you get any additional ideas.

That's about all the "preproduction" I do for a family event like this.

Now let's talk about what to do when you're at the event.

Variety is key to great video. Get a large variety of different shots.

This is an important concept, so I'll repeat it: Capture a large variety of different shots.

As an example, think about carving the cooked turkey. How could you shoot it?

You could have a wide establishing shot that shows everyone sitting at the table watching the turkey carving.

You could have a medium shot that's more about the person doing the carving and the turkey, and not so much about everyone at the table.

You could have a close-up of the carver's face, then tilt the frame down to the knife in the turkey.

You could have an extreme close-up of the juicy turkey slices.

You could even get nutty and shoot a clip from the turkey's point of view with the knife coming down toward the lens.

We're talking about one subject here, and we already have several different ways to shoot it.

Variety is key, so get creative. Shoot from unusual angles, extreme high angles, extreme low angles, POV (point-of-view). It's all good stuff to have later when you're editing.

Variety gives you editing choices and makes it a lot easier to create visual interest, so get plenty of different shots.

The interviews I do at this kind of event are very basic.

I point the camera at someone and ask them questions. You can ask all kinds of questions but here are a few I like to ask:

I tend to start with simple questions that are easy to answer like asking them for their name and age. Then I build up to more complex questions.

Also, if you have more than one person in the frame, sometimes it will help them feel more comfortable in front of the camera because they aren't alone.

Later when I'm editing, I'll use the interviews and cut away to clips that demonstrate what they're talking about.

By the way, a camera-mounted shotgun mic is often sufficient for these kinds of interviews because the camera is quite close to the interviewee.

Listen to the sounds as you're shooting, and you'll find all kinds of natural sound that creates a sense of time and place.

Think about all the sounds that a kitchen makes when people are prepping a Thanksgiving dinner. Knives on cutting boards, ovens opening and closing, water running.

These sounds help place the viewer at the location.

Make sure you record not only interviews, but plenty of natural sound as well.

Experience helps with this one, but if you can anticipate upcoming action, you're more likely to capture it.

You might be shooting video in the kitchen but hear something in the other room that could be a great video opportunity.

If you stay alert, you'll be more likely to capture the video clips you want.

If you think "beginning, middle, and end" for every segment of your video, you'll have an easier time telling a story.

How would that apply to Thanksgiving?

If you needed to tell the story of the turkey in three shots, you might have one shot of the turkey getting prepared and stuffed.

Your second shot might be the turkey going into the oven.

The third shot might be someone biting into a turkey slice, hopefully with a satisfied look on their face.

For the overall get-together, there's a beginning, middle, and end as well.

The first shot is people arriving.

The second is people eating.

The third is people laying on the couch, too full to move.

You have zillions of choices with this one. But try to capture beginnings, middles, and ends of everything you're shooting.

8. Consider Putting Down the Camera

As much fun as it can be to capture video of an event like Thanksgiving Dinner, sometimes it's a good idea to put the camera down and be 100% present with your family and friends.

Making memories can be more important than keeping them.

I try to balance this with shooting, because frankly I want both.

I hope these tips help get your creative video mind going.

And if you celebrate Thanksgiving, I hope you have a great one!

Personally I'm looking forward to it, and I'm planning to shoot lots of video. :)

P.S.> Do you have additional tips for shooting video at Thanksgiving or other events like this? Please feel free to leave them in the comments below.