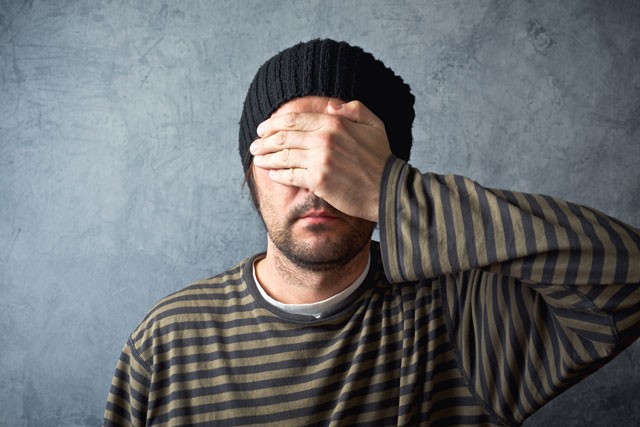 Many people don't realize they're making the same mistakes over and over when they shoot video of interviews.

There are a few mistakes that I see more often than others.

Following are the most common video interview mistakes I've personally noticed along with the solutions for fixing the mistakes.

Mistake #1 -The interviewee is too close to the background

When the interviewee is too close to the background behind them (whether it's a wall, bookshelf, background fabric, or whatever), the frame becomes flat and boring.

The solution is simple: move the interviewee far from the background. How far? It depends on the camera you're using and how much distance you need for the camera, but 1/4th-1/2th the distance of the room can be a good idea.

That's just a generalization. Really, it depends on the situation, but get the interviewee away from the background. They shouldn't be standing right in front of a wall, door, tree, or any other object.

Put some significant distance between the interviewee and the stuff behind them.

This adds depth and visual interest to your video frame.

Mistake #2 - The key light is on the wrong side.

What you light is what you emphasize. When the key light is on the wrong side of the face, it makes the face look wider. It can sometimes place one of the eyes in shadow.

We don't want to see a one-eyed wide face.

Instead, if you put the key light where it typically belongs, both eyes are lit. The front of the face is lit, and the side of the face that's closest to the camera is put in shadow, which means that the lighting can have a slimming effect on their face (usually a good thing!).

Here is a solution...

This is a diagram that shows where to put the lights for a typical interview setup. 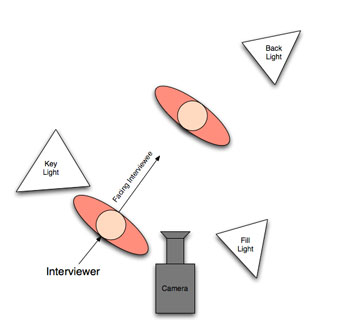 If you're shooting the interview without lights, then position everything so a window replaces the key light on the diagram.

Mistake #3 - The framing is too close or too wide.

If you're framed too close to the interviewee, then it feels uncomfortable for the viewer. It's like we're standing uncomfortably close to someone in a conversation.

If you're framed too wide, then we see too much of the environment and we don't see as much of the emotion on the interviewee's face.

The ideal situation is somewhere in-between. I've shown different examples of close-up framing in this video. For a lot of interviews, it makes sense to use a standard close-up.

And if you're using a second camera, then you could frame it with a head-and-shoulders close-up. That way you could cut to it every once in a while.

But if the whole interview were a head-and-shoulders close-up, that would be too close for too long.

Mistake #4 - The background is too busy.

Aside from the aesthetic problem of a busy background, many of us get distracted easily.

A busy background can damage the effectiveness of the video because we're not paying attention to the interviewee as much.

One option would be to reposition everything so you have a different background.

Another option is to use a shallow depth-of-field to blur out the background.

And if you don't have a good background to work with, you can bring a background fabric with you.

By the way, another very distracting background is a blown-out window in the video frame.

If you put your interviewee in front of a window, then there's more work you'll need to do to make it look good. For example, you could put ND (neutral density) gel on the window to darken it.

The truth is that many viewers won't consciously notice the mistakes.

Instead, they'll just be uncomfortable and not really know why.

We don't want that. It makes sense to learn the correct way to do things and then do them.

Or not do them. If you know what you're doing, you can break the rules (for a reason). But it should be intentional, not accidental.

My suspicion is that many of the video interview mistakes are accidental. Hopefully this information will help prevent that.